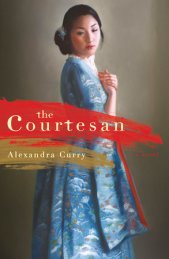 Alexandra Curry is as fascinating as the characters in her debut novel, The Courtesan.  She was born in Canada to Austrian and British parents and spent most of her formative years in Southeast Asia. She has lived in Europe, Canada and the United States. She is a graduate of Wellesley College, served as Director of Finance at Cambridge Professional Group, and AVP at Chase Manhattan Bank.  Ms. Curry is married and currently living in Atlanta.  She lists her current occupation as novelist.

An article about Alexandra Curry and her new book in Creative Loafing Atlanta by Andrew Young published 09-15-2015 states in part:

In 2004, Curry and her husband visited Shanghei and she overheard a guide speak about Jinhua, who was the courtesan of one of China’s first diplomats to travel to the West before returning home at the onset of the Boxer Rebellion. “I was fascinated,” she says. “I said to my husband, ‘If I w

Biographical Dictionary of Chinese Women: v. 1: The Qing Period, 1644-1911   By Lily Xiao Hong Lee, Clara Lau, A.D. Stefanowska provides a detailed biography of the woman known by many names including Sai Jinhua.   If interested,  click on her name to retrieve the dictionary entry.

There are many fine reviews that tackle the specifics of the story but  I have chosen to craft my review from a different perspective.

As courtesans in Chinese history, and Jinhua in particular, are unknown to the American reader I looked into her biography before I began the book.   I found learning about Jinhua in real life better prepared me for the fictionalized story.  There is photographic evidence of Jinhua throughout her life. Her face reveals no emotion but you are haunted by her empty eyes.  It would seem only natural to want to construct a story to connect the events in her life.

With those black and white still images in my mind, I found that Curry brought Jinhua fully alive.  The scenes were almost too physically “real” to handle; they assault the mind’s eye.  Additionally the language directed at her was so coarse, abusive and vile that I felt sickened by the thought that this was reality for little girls in 19th century and still is for many in our 21st century world today.

Readers of Memoirs of a Geisha have been exposed to the exploitation of women and the sex trade but the descriptions of life in a Chinese brothel are so hideous as to seem unbelievable.  It was striking to me that Jinhua’s childhood coincided with my grandmother’s childhood; worlds apart in much more than geography.

Despite living in a vacuum void of respect and dignity let alone love and affection,  Jinhua never loses a positive sense of self, innate curiosity or hope that the future will be better.   She survived such unimaginable horrors over and over; it is a wonder she didn’t succumb to the fate of so many unable to live in this wretched life any longer.  At least that is how Curry decided to write her story. One is left to wonder if she ever, in reality, truly experienced joy, happiness or peace .

The glimpses into imperialism, the Boxer Rebellion and the emergence of West influence on Chinese life were not deeply covered but did provide a comfortable backdrop to the heart of this book…Jinhua’s poignant life story.

Curry has done her best to create a plausible story for this lost soul who has been subject of conjecture and hyperbole for decades.  It should be remembered that this is a work of fiction and the author has taken the literary license to conflate her life and in doing so has gaps in time that leave the story a bit confusing.  It would have been interesting to have created a trilogy of her life in three separate books; happy childhood, orphan sold for the sex trade, and adult. Greater depth on social conditions and the changes in the world could have been better developed.

Overall I found the book a very worthy read.  The first half of the book captured my attention. The second half seemed to flow less smoothly.

Curry writing style is as one reviewer wrote “almost lyrical”.  I look forward to reading to her second book!