“If life is a race to the finish line, I’m years ahead now.  In the course of our lives, most of us will get… [bad] news…one day.  And every day you don’t get …bad news increas

es the chance that you’ll get it tomorrow. So get ready.”

ARC hardback copy provided free of charge by Tim Duggan Books via edelweiss in exchange for my honest opinion.

Michael Kinsley, for the edification of the younger generation, is well known to Baby Boomers for his left leaning politic 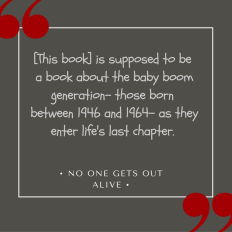 al commentary in print and publicly on numerous televised shows including Firing Line  and as co-star of Crossfire representing the left side of the political spectrum pitched against Pat Buchanan on the right.

In 1993, at age 42, Kinsley was diagnosed with Parkinson’s disease.  At the peak of his career, he had crossed “the line” from rising star to dying star.  In astronomical terms, a “red giant”.

Successfully ensconced  in self-denial for nearly 9 years, challenged by the advancing effects of the disease, had to release the diagnosis publicly in 2002. This admission cracked open his career and forced him to face his future.  The first casualty was a retraction of an offer to run the highly acclaimed magazine, The New Yorker.  He found solace to this first blow to his rising career with success with other endeavors…but it was a sign of things to come.

Now at age 65, Kinsley has written what he hopes will be a guide to fellow Baby Boomers as they, too, face a future with a rapidly approaching expiration date.   He writes, “This book is supposed to be funny, as well, on a subject that does not lend itself to humor.”  Admittedly at times there are witty statements that will make you smile, at the same time the self-deprecating remarks that leave you sad as you understand that a vital and creative journalist has lost his “edge” and he knows it.

Several of the chapters have been lifted from essays appearing previously in other print sources.  My overall feel is that book is somewhat disjointed but delivered with heartfelt genuineness.  Kinsley veers from discussing his life with Parkinson to comparing it to other mind altering diseases such as Alzheimer’s.  He concludes the book with a lecture on the legacy Baby Boomer’s should aspire to achieve.

As an aging Baby Boomer myself, I finished the book with mixed emotions.  Apprehensive about my future, resigned that I can’t do much to face the inevitable but inspired to live this final chapter as fully as possible and to love each sunrise and all my friends and family.