ARC: NETGALLEY in exchange for an unbiased review.

The room wasn’t much just a steel table and chairs, old paint on the walls with the occasional rust stain, two windows frosted by contact paper and a battered desk in the corner,  well out of splattering range…

Jack Renner’s clients would have seen many such rooms in their time..

Brian Johnson, a life-long criminal miscreant, believes he is completing a required pre-release prison interview. Decked out in gangsta garb, stylng a cocky attitude, Brian struts into what appears to be an interview room followed by “Dr.” Renner.  Jack Renner, Cleveland homicide detective by day, dispensor of vigilante justice in his spare time,  has “interviewed” 14 “clients” here.   He has a well-honed method getting the most hardened criminal to spill their story.  Each client has been hand selected after careful consideration,  Jack has retrieved every known fact about each one and is ready to play his role in cleaning up the world.

So Brian, like the 14 before him, never knew it when the gun pointed at the back of his head was fired.
Bang. Bang. Bang.

Maggie Gardiner works as a civilian criminalist with the Cleveland Police Department primarily collecting fingerprints but has experience in serology and spends time working crime scenes work as well.  Naturally inquisitive, doggedly persistent and keenly observant, Maggie takes on a crime scene challenge like hound dog on a scent.

Renner has managed to control his shady side to perfection right up until he bumps up against Maggie.   As the morgue fills with unfortunate victims and murdered criminals , Maggie begins to connect the dots and unknowingly closes in on Renner’s secret life.   As Jack unravels trying to control and steer the investigation away from his involvement, Maggie begins to question inconsistencies in his behavior and statements until the day….

Jack straightened and turned to her…She stared at him open-mouthed.  Then she said, “It’s you.” “Yes, Maggie,” he told her. “It’s me.”

The novel’s overarching theme posits the question… when is it moral to take the law into your own hands?  When society fails to protect the weak from predators that game the system should someone step in and stop the madness?  What is the line between justice and vigilantism?

Strengths
The author, a forensic investigator herself, shares her knowledge of the work in exquisite detail.

The parallel story lines with Jack as part of the investigative team trying to distract Maggie from linking him to her findings and Maggie’s dogged determination to unearth the truth move steadily through the story before reaching an unexpected ending.

Jack’s clients reveal the seedy side of life and focus the reader’s thoughts on topics such as human trafficking and elder abuse and neglect.

Weakness
Black “tells” us things about Jack, Maggie, the victims and the perpetrators, but we don’t become invested in their lives. We don’t know the backstories. She doesn’t scratch beneath the surface. It would have been better to personalize the main characters in enough detail to excite the reader to follow them in later works.

Overall impression
A worthy read. The hot topics will challenge your thoughts about the justice system and the plight of the innocent. Hoping for more character development in the second issue of the series.

My Summer With Gramps

My Summer With Gramps

ARC:  NETGALLEY in exchange for an unbiased review.

Want a crash course on world history, American civil rights, religion, economics, philosophy,  modern day politics… and much more?  Grab your bike (don’t forget your helmet) and ride on over with the boy to Gramps house.

The nameless narrator, a 13 year old boy, hasn’t seen his Gramps for at least eight years although as he says, “I seem to remember him fondly“.  The reader is left pretty much in the dark about the bad blood between the boy’s parents and Gramps and the long silent years. If their relationship was like my family, who can remember why.

It’s the end of the summer, the boy’s parents are going through a rough patch together, and his mother tells him he needs to visit his grandfather.

“Go see your grandfather,” she suggested in a way that sounded distinctly like an order…”It will be a nice surprise for him.” …So here I was riding along this bumpy trail… I reached Grandpa’s …house [and] I spotted him in a rocking chair.

I stepped up on the porch and said,”Howdy, Grandpa!”
Grandpa cracked an eye open and said,”What brings a young lad like you over here on such a find summer day?”

What was probably intended as something to do one fine day to get him out of the house turned into a summer’s project by Gramps to cram a lifetime of knowledge into the boy’s memory.

Warning to the reader.  You will want a dictionary and perhaps a tab open on your computer to www.dictionaryofobscuresorrows.com  The boy won’t be the only one learning a thing or two.  At least once during each visit Gramps uses some highfalutin word which prompts the boy to ask what?

I got to Gramps about noon.  I was beginning to think my constant bloviation had driven you away.”  Boviation?  “Yes, pompous speechifying.”

The boy is an information sponge and Gramps is a walking encyclopedia.  As the summer progresses each of them undergoes significant character development.

As a proud Baby Boomer myself, I enjoyed Gramps style of music always playing on the old radio somewhere in the house.  Couldn’t help myself but start humming a very familiar tune to my old ears.  I wasn’t too happy that Gramps enjoyed his “jug” so often but he had some quirks that were very endearing.

And I personally want to thank Gramps for introducing me to a new word: snollygoster. Look it up.  A very apropos word for this political season.

Enjoyed the book tremendously although at times I had to admit I was overwhelmed with Gramps bloviation. 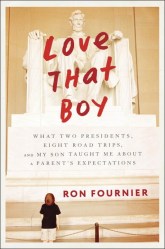 WHAT TWO PRESIDENTS, EIGHT ROAD TRIPS, AND MY SON TAUGHT ME ABOUT A PARENT’S EXPECTATIONS

hen a woman is pregnant, we say she is expecting. Expecting a baby and filling with expectations…Parenthood is the last chance to be the person we hoped to be. We want to get it right. We want it to be perfect, and that’s the problem. It’s a hard slog between aspiration and realization. Ron Fournier

Several weeks after I finished Love That Boy I was unsure of how I felt about the book.  Since I laid down my paperback ARC copy, and began reflecting on the impact the book had on me, Ron Fournier has appeared on several TV programs promoting the book often with short video clips with his son, Tyler.

My first impression of the book was mixed.  I had expected a straight forward biography based on the subtitle…What Two Presidents, Eight Road Trips, and My Son Taught Me About A Parent’s Expectations. I am glad I gave myself time to let my thoughts marinate because I have grown deeply affected by the book.

Ron Fournier was a successful White House correspondent caught up, in his words, “an ego-inflating career that I often put ahead of my wife and kids“. His youngest child, Tyler, arrived with a bright, loving and funny disposition.  His precocious vocabulary and professorial demeanor left no doubt that he would have a bright and successful life.  But there was another side to Tyler.  Publicly Tyler would exhibit an “inappropriate” social awkwardness that made Ron uncomfortable and embarrassed.

As time went on it became obvious the idealized image and expectations for Tyler’s life didn’t match up against reality.  Tyler’s awkward social behavior had only increased much to his parents’ dismay which led to frustration and family disharmony.

The turning point for all their lives began the night that Lori Fournier discovered, while watching a TV Series entitled Parenthood, that Tyler shared the same characteristics as the child on the program.  She was immediately knew Tyler “would not outgrow it.”  Shortly thereafter Tyler, at age 12, was diagnosed with Asperger’s Syndrome.

Ron takes the reader on his journey of discovery to understand Asperger’s.  Utilizing Tyler’s love of history and the need for father and son to spend time in each other’s company, they visit historic settings across the country.

Ron fills in the spaces of his family’s story with information and knowledge meant to enhance the lives every family; not just those challenged with a special needs child.

When I stopped trying to figure out why Ron skipped back and forth between Tyler, the medical professionals, and the personal stories of the community, I realized that story wasn’t as disjointed as it first appeared.  Ron was sharing his own story as it unfolded for him.   Step by step we are drawn into heart of this fabulous Fournier family.   You can’t help yourself… you WILL love that boy.

Thank you, Ron Fournier and Harmony Books for the ARC paperback through Shelf Awareness.  The receipt of this paperback in no way influenced my review.  Around the same time I received the ARC I was granted an e-galley version by Harmony books via Edelweiss.