This Too Shall Pass

This Too Shall Pass

ARC: EDELWEISS in exchange for an unbiased review.
Also won an ARC from LibraryThing/Early Readers 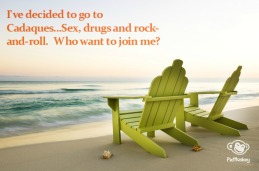 For some strange reason, I never considered what it would be like to be forty…And yet here I am. It’s my mother’s funeral, and if that’s not enough, I’m forty…Illness evicted her from her throne so cruelly in the end, it completely destroyed her kingdom, and pretty much screwed us all up one way or another.

Cadaqués, a remote Spanish village, buffeted by savage winds, isolated by mountains, breathtaking sunrises and only accessible by a “hellish” road.

Bianca and her larger-than-life mother shared 40 years of love, laughter and fun; a life together that Bianca thought would never end. Throughout the years, they shared this zany life with a cadre of poets and free spirits drawn to her mother like a moth to the flame. These adults lived life to its fullest with her effervescent mother as the center of their world. And yet when the insidious creeping disease (Parkinson’s) showed up progressively dimming her mind and froze her smile, the friends that couldn’t live outside her shadow were nowhere to be found.

Most people go through the grieving process by reaching out for support from others or keeping themselves so busy there is no time for deep reflection.  Some go to the opposite extreme by withdrawing from loved ones and friends; avoiding places that remind them of their lost loved one. And some act-out by engaging in what most people would consider dangerous or socially unacceptable behavior.

We find Bianca floundering in her grief.  She is no longer someone’s daughter.  She doesn’t know who her mother was in the end.  Will she face the same fate? Question upon question fills her mind. She tries to mute her pain and confusion through frequent sex. Sex is “the only thing that momentarily alleviates the sting of death-and life-…is sex. It only lasts a few seconds, though…”  (Some readers may be offended by the occasional use of the word f*** or the many references to her sexual escapades.)

She leaves Barcelona to return to her mother’s house in Cadaqués on the Mediterranean.  Cadaqués, a remote Spanish village, buffeted by savage winds, isolated by mountains, breathtaking sunrises and only accessible by a “hellish” road but to the adventurous and brave…paradise.  Accompanying her are her two sons, two ex-husbands, and two best friends…and a married lover who sneaks in from time to time.

Surrounded by those that love her, she progresses through her bereavement..first numb and stunned then moving deeper through memories and reflection until finally she comes out the other side at peace.  She comes to know that it is okay for her to become an adult without needing her mother’s approval or guidance.

The last memory of her mother that she shares with us is perhaps the most poignant.

I still occasionally tell myself the story you told me once, when you [were] consoling me after my father died…A very powerful emperor gathered all his wise men and… said to them, “I want a short sentence, that serves all possible circumstances.” [Following] months of contemplation…”We have the phrase, sire.  This too shall pass.”

My personal thoughts? It was a great read on a rainy day. It is only 169 pages long. The descriptions of Spain and Cadaqués make me want to pack my travel bags. And I must admit it brought back some personally difficult moments as I sat by my mother’s death bed; and it is true…This too shall pass.  But it is never forgotten.