Notorious R. B. G. : The Life and Times of Ruth Bader Ginsburg 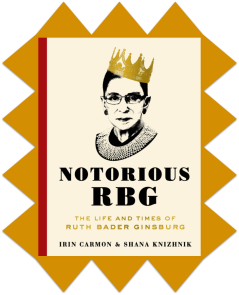 The Life and Times of Ruth Bader Ginsburg

During the February, 2016 memorial coverage of Justice Antonin Scalia, I found myself drawn to a photograph taken in India in 1994 of Justice Scalia and Justice Ginsburg together lumbering along waving from atop an elephant.

It stopped me in my tracks as I knew they represented the yin and yang of the American Justice System. Was it conceivable that they were friends outside their hallowed chambers? What was my little 5 ft tall Jewish icon of Women’s Rights doing hanging around the man that declared that the constitution didn’t bar sex discrimination?

That question rattled around in my brain and prompted me to look into her biography. I needed to know more about Ruth as a person, not just a Supreme Court Justice with fancy collars and a fiery pen. There are some great choices available, including books written by Justice Ginsberg herself, but I fell in love with Carmon and Knizhnik’s Notorious RBG: The Life and Times of Ruth Bader Ginsberg.

This glossy picture strewn work brings RBG to life in short but thorough stories of her progression from Kiki, the baton twirling teen, deeply in love with the adventurous and independent Nancy Drew books to present day, a strong and resilient Supreme Court Justice not afraid to stand up and fight for human rights.

RBG, born in 1933, began her steady growth toward gender independence fighting as she states, with three strikes against her, “[I was] a woman, a mother and a Jew.” But as she fought for her own survival and career, she wasn’t as yet a strong advocate for feminism. As a college professor, Ruth, inspired by student activism, joined a national movement that has steadily over tme moved toward not just women’s rights but equal rights for all regardless of gender, race, or social status.

Ruth began to fight her way into a “man’s world” pulling all women along with her. She knew the importance of staying focused and educated on issues. She formed her own style. Pick your battles. Fight hard but not loudly or brash. Permanent change must be achieved through baby steps, carefully. When you have something to say, say it with a steady hand and carefully chosen words. Your voice will be heard over the din.

As much as I was fascinated by all the legal briefs and dissents that Ruth presented, the most important message I got from the book is best said by the two people perched on top of that elephant so many years ago.

“Call us the odd couple,” Scalia said. “She likes opera, and she’s a very nice person. What’s not to like — Except her views on the law.”

[Likewise, Ginsburg could acknowledge her differences with her good friend Nino while still admiring his peppery prose.] “I disagreed with most of what he said, but I loved the way he said it,”

These two people, at odds in their legal lives, can also see the human side of each other and share the richness of friendship and love.  In our current political climate, Antonin Scalia and Ruth Bader Ginsburg have shown the importance of civility, respect and friendship.

I am going to jump in here with a diversion from the book and a personal comment.  As we head into a new world in America, my best guess is

that Justice Ginsburg will not be deterred by tweets or taunts. She will stand with her principles and continue to represent all of us to the best of her ability.  Highly recommend reading.