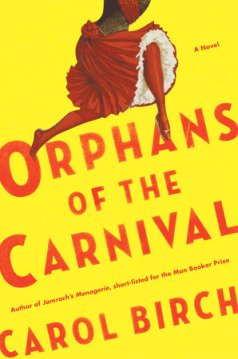 Where do you begin when you leave a book in an emotional trash heap?

I fell in love with the cover immediately and still think it is one of the best I’ve seen this year.  And certainly the flashy promise in the press blurb worked its magic on me. I leapt at the chance to read the book.

The dazzling new novel, evoking the strange and thrilling world of the Victorian carnival, from the Man Booker-shortlisted author of Jamrach’s Menagerie.

Let’s start with some true facts. The protagonist in the novel, Orphans of the Carnival, was a real person. In 1834, a native Indian woman living in western Mexico gave birth to a child so fiercely abnormal the mother feared her daughter was the result of supernatural interference and fled with the child into the mountains. Upon discovery two years later, the child, covered from head to foot with dark black hair and an ape-like face was abandoned by her mother and placed in an orphanage. The child was found to be highly intelligent and blessed with a sweet disposition. A local governor adopted the child to

serve as a maid, caretaker to an elderly family member, and an in-house oddity. In 1854, upon the death of her charge, the child left to return to her native tribe. Somewhere in that journey, she was discovered by an American showman and was convinced to join him for a life in the world of human curiosities thus enabling her to fulfill her dreams of seeing the world outside her small village.

The child’s name was Julia Pastrana and in her short lifetime became one of the world’s best known curiosities.

The author has done her research. The major facts known about Julia Pastrana are in the novel. I know this because I was affected enough to learn more about the real Julia. Believe me, Julia’s life story coated with the fictional embellishments will rip your heart out.

I was appalled at the horrors and mental cruelty she suffered at the hands of greedy carnival men and “respected” medical authorities that repeatedly reported that she was a hybrid human. There’s no doubt that this fiction represents Julia’s reality.

In the real world, one well-known New York medical authority examined her and declared she was a half-breed of human and orangutan origin. This wasn’t a new idea. Two hundred years earlier a Dutch doctor stated that orangutans were born “from the lust of Indian women, who mix with apes and monkeys with detestable sensuality”.

Each time Julia stepped on a stage and faced the hordes of gawkers ostensibly interested in her singing voice and her talented dance routines, she knew, and you, the reader knows they are just there to stare at her face. Her greatest desire in life was to be loved and for people to see her, to see beyond the hairy body and the “world’s ugliest face”. Her single most need was the answer to a simple question…Am I Human?

Julia’s final manager, Theo Lent (and husband) must have been a real son-of-a-bleep.  The author presents him from two sides- the face of the carnival barker who lived to make money off his “precious possession” and the lonely friendless leech marrying to force Julia to remain with him. When tragedy strikes, Lent shows his true colors and they are not pretty.

A misfit modern day junk collector finds a discarded broken doll and her fictional story reveals itself to have links to Julia. Overall, this added story was a distraction to the emotional turmoil surrounding Julia and her unfortunate life. I believe that sticking to Julia and the other poor unfortunate souls in this macabre world of entertainment would been better. In my advance reader copy,  Rose’s story breaks into Julia’s story making it difficult to keep track of the narrative. Having said that, the ending of the book was a complete surprise to me.

I wanted to give this book a 3 star. In so many ways, it probably deserves it. The first half of the book had me flipping pages. The story just repeated itself over and over. New city, new show, same old cruel taunts and jeers. Midway I found myself ignoring Rose’s story and just reading to finish the book. As much as I flinched at every cruel word flung at the unfortunates, I never felt a depth to the characters themselves.

I do want to thank Netgalley and Doubleday for the advanced readers copy. This review reflects my own personal views and reaction to the novel.

2 responses to “Orphans of the Carnival”