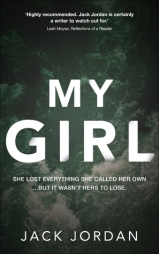 Source: ARC e-book via Netgalley
in exchange for an honest review.

I’m not going mad. Someone is taunting me.
I’m not doing this. I would remember.
I’m not losing my mind.

Paige Dawson’s life has spiraled out-of-control. Preferring to drown her grief and hide from reality, Paige has relinquished her self-respect and dignity to remain in a drug laden and alcohol stupor.

For the first few seconds after she woke, Paige Dawson lived in a world where her husband Ryan was snoring lightly beside her, and her daughter Chloe was sleeping peacefully in the next room. When reality slowly trickled in…[she] reached in the dark [for] the tray of tablets…and picked up the half-empty wine bottle and took a swig.

Ten years ago, her only daughter, Chloe, 14 at the time of her abduction, was murdered savagely. After an exhaustive search, Chloe’s dismembered arm was found frozen in a nearby river, fingertips reaching to the sky for recognition. Her husband, Ryan, had tried to rescue Paige from her despair but at some point lost his own will to live. Two months ago, he slashed his wrists in the bathtub forever scarring what was left of Paige’s sanity with the image of his lifeless body.

Ryan’s mother, Paige’s father and her cleric brother, Maxim offer support and counsel but nothing seems to stop her from her self-destructive path. Her repeated social misconduct during her blackouts only further alienates her from help when she begins to question strange encounters and disturbances in her home.  No one believes her when she reports someone has been in her house and removed items, cut her husband’s face out of every photo album, and cleared her daughter’s room of memorabilia.

As the story gains steam, I was ready for intrigue and some intense suspense. But it wasn’t long before I felt like I was in a train wreck that just wouldn’t end. Wild and crazy things happened that showed great imagination but they seemed to come out of no-where. One twist caught me by surprise but after the shock of discovery, I was disappointed that we weren’t given background on the reason for the character’s behavior.

The author has great potential and unquestioningly has writing talent. Hopefully, as his literary career matures, he will better develop his characters lives and avoid repetitive actions intended to create suspense but serve only to dull the story. Keep writing, Jack Jordan. I will look for your next book to see where you have strengthened your focus. You’ve got what it takes, kiddo. Keep trying.

Jack Jordan is the bestselling British author of two novels: Anything for Her (2015) and My Girl (2016). He describes himself as introvert disguised as an extrovert, an intelligent person who can say very unintelligent things, and a