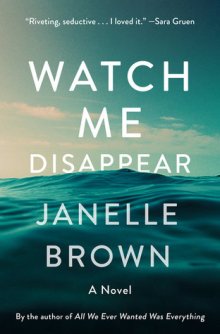 IT’S A GOOD DAY, or maybe even a great one, although it will be impossible to know for sure later. By that point they’ll already have burnished their memories of this afternoon, polished them to a jewel-like gleam. One of the last days …before Billie died…

Billie and Jonathan Flanagan have been married for 16 years and have reached that stage in their relationship where things have gone stale. Billie rejuvenates herself by trekking in the mountains alone or with a friend. The time comes for a little more “me” time, and she announces she is going alone to a remote section of the Pacific Crest Trail for a few days.

When she doesn’t return, a search discovers her broken phone and a lone hiking boot off the trail. After a lengthy search, she is presumed dead.

A year later, their daughter, Olive, begins to have visions of her mother in various settings that seem to imply her mother is not dead but waiting somewhere to be found. Olive’s erratic behavior and frequent unexcused absences jeopardizes her attendance at an expensive private high school. Some feel it is delayed grief with the anniversary of her mother’s death and others believe she has a medical problem. She is convinced she is a psychic.

Billie cannot be declared officially dead for a year which has left Jonathan in limbo financially. Without a death certificate he cannot receive the life insurance benefits. Shortly before Billie’s death Jonathan had quit his job to follow his dream of writing a book. Now, a year later, without his wife’s income, Jonathan is struggling to pay the bills that include the expensive private school tuition for Olive.

Jonathan has begun the court directed process of “proving” his wife is not dead. In the search through the family’s financial records he discovers secrets his wife has hidden from him. As he peels back the layers of her deception, he discovers a secret life before their marriage.

The mishmash of issues including Olive’s “visions”, financial woes, Billie’s secrets, and Jonathan’s weak-kneed personality seemed so directed and contrived but overall I consider it a nice simple read. If you excuse my vulgarity, the purview of an old woman, I wished Jonathon would grow a pair.

It will come as no spoiler that Billie is still alive, but the reasons why will be a surprise. The ending did make me say, “How about that”. If you are looking for a book with a simple plot that you can take with you to read at the car service center, here you go.