The Book of Polly: a novel 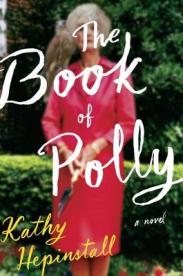 THE BOOK OF POLLY

I’m not sure at what age I became frozen with the knowledge, certainty, and horror that mother would die one day. . . One of my earliest memories was reaching up and trying to snatch a cigarette from her lips. Even then I knew my enemy.

[Polly] had conceived me in something close to a bona fide miracle, when she and her soon-to-be-late husband of thirty-seven years consummated their love for the last time. From the absurdity of that union came the news that my mother received from her doctor three days after my father’s funeral: Polly, [58], was due to have one more child in the year 1992. [Me.] Willow.

Eight months later I  was born, my family already gone like a train pulled out of the station: my father dead, my brother and sister grown and gone. . .

Don’t you love a book that latches onto your funny bone? My first impression of Polly Haven reminded me of my favorite cartoon character, Maxine; brash, fearless and prickly. This is truly a southern tale filled with a small cast of unique characters much like Fried Green Tomatoes’s Iggy Threadgoode or Steel Magnolias’ “Ouiser” played by Shirley MacLaine.

Willow narrates the book beginning when she is a 10-year-old sharing her feelings, thoughts and emotions about living with a gun-toting, Virginia Slims smoking, foul-mouthed, Margarita slurping mother who loves her dearly; but Polly’s actions, viewed through a child’s eyes make you wonder if she was a spawn of the devil. The novel covers the next six years of their lives. Six years filled with tit-for-tat conflicts between a septuagenarian mother and a teenage terror with a propensity for lying. The narration in a child’s voice is a softening agent for adult topics like alcoholism, marital disharmony, religion and terminal illness and engenders sympathy for teenage angst and budding first love.

One of Polly’s traits that drives Willow crazy is her unwillingness to share her past life – life before Willow – one that includes deeply held dark secrets.  Willow is determined to peel the onion on that story and other guarded truths in order to find a place for herself in the family timeline. Some place where she understands where she came from and where she will be in the future. She is terrified of finding herself alone in the world without – her mother.

Polly’s cigarette habit frightens Willow the most. She does everything she can to make her mother miserable in attempt to ward off the “Bear”, her mother’s term for cancer.  Her efforts to prolong her mother’s life produce some deeply touching moments and some rather explosive reactions between them.

Polly’s over-the-top reactions to perceived or actual attacks rankles school authorities, her equally cantankerous neighbors and the world at-large. That includes the squirrels that invade her precious pecan tree.

I loved this coming-of-age story and I had more than a few hearty chuckles over the neighbor’s cat straddling the rickety fence, the next door neighbor’s free-range undisciplined Montessori twins, Dalton and Willow’s budding romance, and the bond between her brother’s friend and Polly.

Underlying all the spats and bluster lies the meaning of life for all of us. And the feel good ending, seen coming a mile away, reminded me of the last verse of Desiderata:

And whether or not it is clear to you, no doubt the universe is unfolding as it should. Therefore be at peace with God, whatever you conceive Him to be. And whatever your labors and aspirations, in the noisy confusion of life, keep peace in your soul. With all its sham, drudgery and broken dreams, it is still a beautiful world. Be cheerful. Strive to be happy.