SOLD ON A MONDAY

SOLD ON A MONDAY

Sometimes we have to make sacrifices for the ones we love… 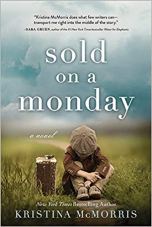 [The detective pulled a chair over to me in the hospital.] I heard, “Can you tell me how it all started?” The reporter in my head blended with the detective before me. I wasn’t entirely sure which of them had asked…

I nodded at him slowly, remembering as I replied.
“It started with a picture.”

Sold on a Monday, like many popular works of historical fiction set in the 1930’s Great Depression is based on an iconic photograph. My favorite being, Mary Coin by Marissa Silver based on Dorothy Lange’s photograph entitled, Migrant Mother.

Sold on a Monday was inspired by a photograph (later questioned as authentic) of a mother and four children on a porch. A sign near them reads – 4 children for sale, inquire within.

Author, Kristina McMorris, nudged by the writer’s innate question…what if… has created a world where a dramatic photograph, taken for personal use by a newspaper reporter on his own time, is found drying in the darkroom by the editor’s secretary, Lily Palmer. The moving picture shows two children near a sign reading – “2 children for sale. Recognizing the work of Ellis Reed, Lily shows the photo to the editor.

The editor, recognizing the dramatic impact the picture will have on newspaper readers, instructs Ellis to write a story about it. Sniffing a chance to advance himself, perhaps leading to his own column, Ellis obliges. Puffed up proud, Ellis is brought down quickly when he is told that the negative and photo have been damaged and he must replace it immediately. Returning to the house, he finds the sign leaning against the porch and the family gone. (We never learn what happened to the original family; something that nagged at me long after I finished the book.)

In that instant he panics. He spots 2 children playing nearby at another house. Grabbing the “children for sale” sign, and with their mother’s reluctant permission along with a handful of money, Ellis stages a new photo. Thus begins a spiral of disquiet that follows Ellis into his new career at a larger newspaper; a success launched by this story. As he rises in notoriety, he is constantly aware it is based on a lie. Lily, also observes, he has lost that special something that reaches the common man.

Lily Palmer, harboring a deep secret of her own, is reminded time and again of the deception when letters and gifts continually arrive at her newspaper for the exposed children. The gifts and letters are placed on the porch in the dead of night, the deliverers unable to face the family. The innocent children were never for sale.

After a time, and independently, Ellis and Lily seek to find out what consequences their individual actions have had on that misused family. They are both rocked to learn that the mother has been confined to a sanitarium and has died. The children were placed in an orphanage. The now infamous photograph led to the sale of the two children to a wealthy family.

Using his newspaper network, Ellis finds the family and scouts the new home. Peering through a window, he spots the young girl, Ruby, neatly dressed, and sitting near a smiling woman. He believes he hears a young a boy giggling in another room.

He tells Lily that all seems wonderful at first glance. But further efforts reveal that appearances don’t necessarily define reality. Ellis and Lily set out to right their consciences and dredge up darkness they never dreamed possible. Their lives and the lives of the children are in danger.

Sold on a Monday is a fabulous 1930’s era “Agatha Christie” mystery with some really sharp edges. The suspense moves slowly at first, careers sputter, personal relationships simmer, and all along we are aware that this is the Great Depression. Desperate times where desperation can lead a person to the “Dark Side.”  The novel does come to a spectacular moment that then settles down to a “happily-ever-after” finish.

Good read for a rainy day!