I squinted, trying to make out the
[license plate].
It was her car.
The VW turned into a Premier Inn.
Can we see Mummy?
Can we, can we, can we?
I made a spur-of-the-moment decision
that would change my life.

What’s cuter than a dad and a four-year-old playing car bingo? A kid with his first School Superstar “cerstiff-a kit”. Little Wills spots his mother’s car in traffic and his intense need to share his pride with his mother melts his father’s heart. They track her car into an underground hotel parking garage and bolt upstairs to greet her. Joe comes to a skidding stop when he spots Mel (Mellisa) in the hotel lobby in a heated argument with Ben Delaney, a neighbor. Ben was screaming at her. Joe quickly frog-marches Wills back to the car to wait for Mel.

Mel swiftly exits the elevator and never sees them before leaving quickly in her car. Once more the elevator door opens and Ben walks out.  When Joe begins to ask about Mel, Ben becomes violent. Refusing to fight the smaller man, Joe gives him a little shove to put space between them, causing Ben to trip over his briefcase and landing on his head on the concrete floor unresponsive with blood trickling out of his ear.

The stress induces a Richter scale asthma attack in Wills. The spare inhaler is not in the car and Wills is in trouble. The two crises force Joe to make a decision – get help for Ben or get help for Wills. Wills wins but Joe does return to find Ben and his car gone along with Joe’s cellphone that he had dropped in the altercation.

With Ben gone, Joe is left to puzzle out the conversation that flipped out Ben. Joe had been pressing Ben about Mel when suddenly Ben shouted, “Just leave it! You have no idea! You’re so f***ing dense that you haven’t seen it, have you?” Just before he fell. 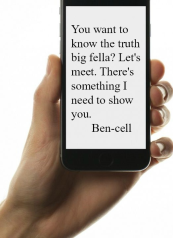 As Joe seeks answers, his warm and fuzzy world begins to fall apart. Ben is nowhere to be found but Joe knows he is alive; he gets regularly cell phone and Facebook messages from him.

Beth, Mel’s best friend and Ben’s wife files a missing person report. The search for Ben gets darker and darker as evidence points to foul play and seems to implicate Joe. On the other side of the equation, Ben’s messages to Joe get more and more taunting and sinister. I am going to destroy you! Mel finally admits she had an affair. All efforts to verify Joe’s claims that Ben has been in contact him are traced back to Joe’s online accounts.

Joe realizes his only way out of this miasma is to find Ben. Against the advice of his newly hired attorney, Joe begins his own private search to clear his name and to save his family.  What he finds confirms what Ben had told him – You had no idea. You never saw it, did you?

I love debut authors and I don’t expect them to rage out of the gate with a blockbuster bestseller. It happens. Not this time. Lies is a easy read, somewhat predicable, and contains elements of mystery and surprise at the end. I found it entertaining and kept my interest. Joe was patently naive and gullible; I think the author was striving for devoted and loyal. Mel, from the beginning, was more worldly and adventurous dusted with a sly and devious capacity to snow Joe. Little Wills was adorable.

Good read for a slow day or long car ride; guaranteed not to make you homicidal.

2 responses to “LIES: a novel”