LEARNING TO SEE: a novel

“It takes a lot of practice to see things as they are,
not as you want them to be.’

A year or so ago I found a copy of Mary Coin, a novel by Marisa Silver, and recognized the cover picture as the

Depression era Dorothea Lange image entitled Migrant Mother.  After reading Mary Coin, a book I highly recommend and reviewed on my blog, I was left with a yen to know more about documentary photography and Dorothea Lange.

Chapter One. Opening scene. 1964, Berkley, California.  If this was a movie script, Dorothea Lange, now elderly and gravely ill, would be seen opening an envelope embossed with the image of the Museum of Modern Art  in New York City. The contents of that letter, we later learn, informs her of their plan for a retrospective exhibit of her life’s work.

The fictional Dorothea, returns the letter to her pocket and without sharing it’s news, turns to the reader to tell her life story in her own words and thoughts. Her flashbacks, narrated as though she is seated across the kitchen table from you; hands wrapped around a hot cup of coffee.

Listen carefully. Her story is complex; much like every person who puts a heavier hand on the scales of life for the greater good over the instinctive need to nurture and protect one’s own family. Dorothea limps over to her desk; she contracted poliomyelitis when she was seven-years-old leaving her with a withered leg, a deformed foot, a permanent limp, and a spitfire will to overcome any other hardship life was ready to throw her way. That strong will, that need to conquer any challenge, will cost her deeply.  She must choose between her burgeoning social justice activism and photojournalism career and her personal life.

I lean over to open a drawer and retrieve [my] files. California, 1936. New Mexico, 1935. Texas, 1938. Arkansas, 1938, Arizona, 1940. Black-and-white photographs spill out…Faces of men, women, and children… They gave a face to the masses struggling to make ends meet. They started conversations… And while I don’t regret my choices, I am saddened that I’ve hurt people dear to me.

Dorothea achieved her childhood dream of becoming a photographer; a career choice diametrically opposed to the family ideal of academics and cultural interest in the arts. In 1918, a twenty-one-year old Dorothea took the bull by the horns, dropped her birth name of Nutzhorn in favor of her mother’s maiden name of Lange, and headed to San Francisco to be as far away from New Jersey as she could get. Once there, she set up a portrait studio and was highly successful for the next ten years; satisfied to create the images of what people wanted others to see of them; not necessarily reflective of their true nature or circumstance.

The Stock Market Crash in 1929 changed everyone’s future. Her clientele disappeared one-by-one as family portraits become a luxury few could afford. By this time, she had married her first husband, Maynard Dixon, a hot-tempered philandering landscape painter with traveling “genes”.  Dorothea, the mother of two boys, found herself between a rock and a hard place. With a floundering marriage and two dependent children, she needed to find work in a world where everyone needed a job. As she struggled to find new footing, Dorothea made the heartbreaking decision to foster-out her boys to give them a stable caring home. A decision made after seeing children left to fend for themselves in the streets.

I had reached a point where… portraits weren’t enough. It wasn’t just an issue of money… I needed to find…something to lose myself in. I needed work that would consume me, distract me from everything I had lost.

Dorothea’s efforts to see beyond her own pain led to a career learning to see beyond self. Taking a walk to clear her head she came upon a breadline of dispirited and lost souls stringing their way to a cup of coffee and a bite to eat. She feared she would disturb their private thoughts but was compelled to capture the moment. After taking the picture she realized no one had noticed her presence. 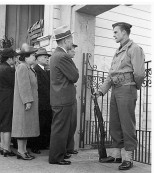 This first photo led to twenty years of documenting the lives of the downtrodden with the goal of raising the awareness of their plight to the unaffected. Some of her work proved too revealing. Her photos of the Japanese American relocation camps were confiscated by the government; a nation unwilling to expose its racism against its own citizenry.

Learning to See is so much more than a biography of a lone woman trying to immortalize the pain and struggles of the broken nation. It breaths life into the stolen moment a photograph shows us. The book makes us ask ourselves – could we better stewards? Do we all need to find our better angels? Can the past revealed in iconic pictures move a nation to heal racism, poverty, mismanagement of our God given resources? In the end, Dorothy wasn’t sure.