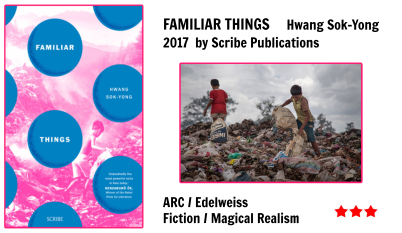 In the nineteen-nineties, following the country’s rapid industrialization and the movement of its people from rural areas to the cities, the trash dumps at the cities’ edges overflowed. Poor families lived near the dumps; many of them picked through the garbage for plastics and metals to sell. . .  Excerpt from The New Yorker, March 9, 2020.

Familiar Things is a fictionalized story of the day to day life of a young teen living in squalor. It depicts life and its hardships on Flower Island, the fictional site of Seoul’s massive landfill. Steps away from the profoundly foul landfill, a shantytown has been created from discarded items and populated by the poorest of the Seoul’s poor.

Although Korea now has a great system of recycling, it wasn’t always true. In the “old days”, deliveries of unwanted items from the mainland arrived three times a day in caravans of dump trucks heaving construction scraps to spoiled food; roadkill to pots, pans, broken glass, and used clothing. Standing at the ready, garbage pickers launch themselves on the garbage heap to scavenge any item that can be sold for recycling.

Let’s clear the air; pun intended. You will feel like taking a shower every time you set down the book. But this isn’t a story about the garbage. Flower Island is just geography. It’s about a child nicknamed Bugeye and the people that populate his life on Flower Island. It is a sad story but engaging. In a country comprised of haves and have nots. This is a story of have nots and the way they make a life for themselves. The living conditions are abysmal but the only time they are made to feel less than human occur when they need to head to the mainland.

Bugeye used to live in Seoul with his parents before his father was taken away for a crime to a “re-education center”. He and his mother lived in a hillside slum where she worked as a street vendor. One day, a friend of Bugeye’s father offered them a new life on Flower Island with him. It meant a further drop in social status but promised more income as a garbage picker.

“It’s just a shack, but you won’t have to pay rent. You’ll make three times what you make now. Where else are you going to find a deal like that?”, said Baron Ashura.

So Bugeye and his mother found themselves, like all the unwanted items tossed off the mainland, riding on the back of a dump truck crossing the bridge and heading onto Flower Island. An addition, built of scavenged wood and linoleum, was added to the side of Baron’s shanty. Amenities – none. Bugeye’s mother moved in with Baron. Baldspot, Baron’s unwanted ten-year-old son moved in with Bugeye and the two boys quickly grew close.

Baldspot, unloved by his father, won my heart. Finding no love at home, Baldspot has lead a secret life much like little Gavroche in Les Miserable. He now has a hyung, an older”brother”!

Big for thirteen-years-old, Bugeye easily passes as fifteen and is expected to become a picker alongside his mother. But he is also a kid, and he finds no one objects if he doesn’t go to work once in a while. So when Baldspot decides to share his secret life, Bugeye follows him into a spellbinding story about Flower Island. The magical realism blends with reality as smoothly as a chocolate/vanilla soft serve ice cream cone.

[Baldspot] gestured to follow him. Where’re you going?
“It’s top secret”, he whispered. “If Dad or the other grownups find out, we’ll get in trouble.”