BENEATH A SCARLET SKY: a novel 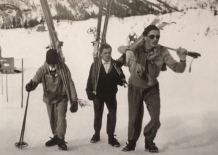 At a dinner party in Bozeman, Montana…I heard the snippets of an extraordinary, untold tale of World War II with a seventeen-year-old Italian boy as its hero. My first reaction was that the story of Pino Lella’s life could not possibly be true… I [later] learned that Pino was alive some six decades later. The story you are about to read is not a work of narrative non-fiction , but a novel of biographical and historical fiction that hews closely to what happened to Pino Lella between June 1943 and May 1945. – Author, Mark Sullivan 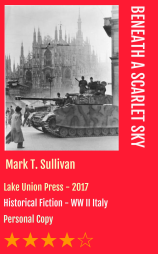 Mark Sullivan, true to his word, gives us the harrowing story of a World War II teenage “Forrest Gump” – a child whose courage would have challenged the most stalwart adult. The story was not an easy one to obtain from him; he had buried it very deep in his memory. Pino was mentally crippled for the rest of his life by the spit-second decision he had to make late in the war – a choice to live or die for the one you love.

Giuseppe “Pino” Lella was ten-years-old when Nazi Germany and Italy’s fascist prime minister, Benito Mussolini, formed an alliance in 1936. By early 1943, Pino was now a pimple-faced seventeen-year-old focused on girls, food, and music; he and his brother Mimo’s attention still centered on themselves and growing up.

Mussolini’s power was waning and Nazi Germany was flooding Italy with troops and supplies to slow the Allies advance from Sicily. The rising scent of war permeated Italy, Pino’s home, and his family’s businesses in the fashion district of Milan. The boys were familiar with and comfortable around the friendly high-ranking Nazis that drove through the city and frequented local shops and restaurants. The evilness and cruelty that lie ahead still dormant in the Italian psyche.

Pino and his younger brother, Mimo, had been fortunate to have been raised in wealth. With foreign born nannies, each had become fluent in English, French, and Italian. Each summer and a month each winter were spend frolicking high up in the Alps at Father Luigi Re’s Casa Alpina, a Catholic boys school. The boys loved their time there skiing and climbing the steep mountain trails.

The trajectory of their carefree lives changed the day Pino “fell instantly in love” with a stranger on the street and asked her for a date. Hoping to meet her at the movies that night, Pino and Mimo headed to the theater (she reneged on a promise to meet him) placing the two boys at the epicenter of the Allies first bombing run of Milan. Both were able to escape major injury but their childhood ended that night.

The boys were sent into the mountains for safety to Father Re. Mimo first, then Pino later when the family home in Milan was destroyed. Pino was soon to learn that the deadly war had reached even the solitude and treacherous slopes of the Alps. At Father Re’s direction, Pino, only seventeen-years-old, spent eight months guiding a multitude of Jewish refuges and downed Allied pilots to safety in Switzerland. Every trip was fraught with danger from the mountains themselves, Nazis, and the murderous partisans preying on the travelers. It is a wonder that the unprepared and inexperienced refugees made it to safety, but they did with the extraordinary help from Pino and other guides that he trained.

Weeks before his eighteenth birthday, Pino’s father ordered him home for a family meeting. At eighteen-years-old, he would be drafted into Italian military service and undoubtedly sent to the Russian front as cannon fodder. Pino’s father and Uncle Albert had, what they considered a better option, albeit one that would require Pino to endure the wrath of the community – enlist in the German Army. With his Uncle Albert’s deep connections, Pino would spend the war in a non-combat Nazi unit.

On July 27, 1944, Pino, aghast at his predicament, donned his uniform of the German Army in the Organization Todt. Everything I have told you about Pino to this point – his courage, his strength of character, his patriotism – pales in comparison to his unexpected role as a prominent spy

for  the Allies throughout the remainder of the war in Italy.

It all began at a serendipitous meeting with Major General Hans Leyers, one of the most powerful Germans in Italy overseeing Armaments and War Production and the General’s disabled staff car outside his Uncle Albert’s store. Pino arrived home wearing his Organization Todt uniform on a ten-day convalescence leave for a war injury. The General’s driver stared helplessly at the engine. Pino, grabbed a screwdriver with his good hand, adjusted the carburetor, the vehicle started, and the rest is history.  The General fired his driver and put Pino in the driver’s seat for the remainder of the war.

Uncle Albert, a member of the Italian Resistance as a secret Freedom Fighter, saw the potential of Pino’s close proximity to everything Nazi:

“You’ll go where Leyers goes. See what he sees. Hear what he hears. You’ll be our spy inside the German High Command.”

It is remarkable that this young man could witness the murders, the mutilations, the despair and hopelessness of enslaved captives and pillage of his own country and still retain his composure to relay valuable information that helped lead to the end of the Nazi presence in Italy. He found true love, faced numerous dangers, saw horrors that would scar him for life, yet, Pino held true and served his country well.

It is not an easy read. Many times I felt my stomach get queasy. But read on I did, I owed it to all the Pinos out there that place country over self.