OUR HOUSE : a novel

She must be mistaken, but it looks exactly as if someone is moving into her house.

The van is parked halfway down Trinity Avenue, its square mouth agape, a large piece of furniture sliding down the ribbed metal tongue.

Fi watches … as the object is carried through the gate and down the path.

My gate. My path.
Whose things are these?

No one expects to return home from a weekend trip to find themselves homeless, their spouse missing and all of their belongings gone. Fi knew that Bram had issues, but she never saw this one coming! 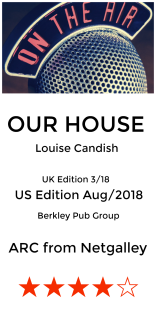 This clever and dark suspense will have you up all night reading!

Fiona (Fi) and Bram Lawson were separated after she found her husband shagging a neighbor in the kid’s new backyard playhouse. (His second transgression in their twelve-year marriage.) But the martial breakup was based on much more. It always is. Booze, lying, fits of anger, and speeding tickets in Bram’s case.

Anna and Bram reveal the story in alternating viewpoints. Anna, seeking to make sense of what happened, tells her story in a lengthy podcast on a site dedicated to victims; aptly named The Victim. Bram’s detailed story, written while in self-exile out-of-country, is a confessional Word document that begins with a simple bout of road rage that is compounded by one bad decision after another, speeding toward an ending you never saw coming.

The drama is revealed like a cat’s cradle, weaving in misdirection and building intrigue. British writer, John Ruskin, aptly wrote: the essence of lying is in deception, not in words.

Anna, at times, comes across a little too goody two-shoes naive. But there is no doubt that she is caught in a vortex of evil not of her doing. Bram, unable to curb his base instincts, finds himself trapped between a rock and a hard place, spiraling out-of-control.

Other characters latch on to Anna and Bram like leeches pushing them to the edge; some with souls dark as the devil. How do you define a friend? How do you know friend from foe? How far would friendship go if betrayed?

Somewhere in all this miasma, love lives, despite divorce, albeit now reduced to a level of caring and compassion one would have for an old pet. Humming just beneath the surface are age-old moral codes serving as a balance beam between right and wrong. Who will find a way to stay on the beam; and who will fall victim to the “dark side”?

How would you handle a world turned upside down? Internalize it like Bram; suffocating under the weight of deception? Or project it outward like Anna; broadcasting her pain in attempt to find her way out of the black hole where her life disappeared?

I Let You Go

It happens in a heartbeat…
the car comes from nowhere…the squeal of wet brakes,
the thud…and the spin of his body
befo

re it slams onto the road…

…the car backs up the street [its] engine whining in admonishment.

Debut Authors tickle my fancy.   I just love discovering new budding authors and Clare Mackintosh did not disappoint me in crafting her first work of fiction.

Drawing on years of experience as a British crime inspector and the emotional loss of her own child, Mackintosh has fashioned a psychological thriller that will appeal to any lover of crime fiction.  First published in England in 2014, I Let You Go will make its hardcover debut in the US in May 2016.

Five year old Jacob, nearly effervescent describing his learning to write his name, races home from school tethered firmly in his mother’s grip.  As they near the house, his mother points across the street at the porch light she has left on for them.

She releases his hand for a split-second to swipe a rain soaked hair lock out of her eye and Jacob lurches forward challenging her…“I’ll race you, Mummy…”

Detective Inspector Ray Stevens and members of his crime investigation team take on the task of finding the hit-and-run driver. A nearly impossible task with heavy rain in the area, blinding headlights highlighting the horror on the pavement, and no other eyewitnesses.

Jenna Gray, suffocating with grief, decides to packs a holdall (gym bag for us ‘Mericans) and leave.  “Can I do this?  Is it possible to simply walk away from one life and start another?  I have to try; it is my only chance of getting through this in one piece.”

Jenna aimlessly travels further and further from Bristol until she sequesters herself in an isolated small cottage in the teensy seaside town of Penfach (Wales).

As the investigation proceeds we meet the Inspector’s family and his team in greater detail. We learn the hardships and pressures that affect everyone during a long and arduous criminal investigation. The interoffice relationship between the DI and his trainee felt contrived and unnecessary. The dialogue would have been better spent, in my humble opinion, exploring his relationship in deeper depth with his wife and children.

I am leaving out some pretty heady plotlines and additional characters as I consider them spoilers. The author tackles some powerful topics that I would love to have seen her explore in greater depth. You’ll know it when you find them! I wouldn’t want to ruin your read!

Mackintosh has done a great job for her first mystery entrée.  It isn’t a masterpiece but very entertaining.  Great airplane or beach read.

She is writing her second book and I for one am standing in line with my hand raised for a chance to review it!

Thank you Netgalley and Berkley Publishing Group for the advanced reader copy in exchange for my honest opinion.