THE WOMAN IN WHITE : a novel 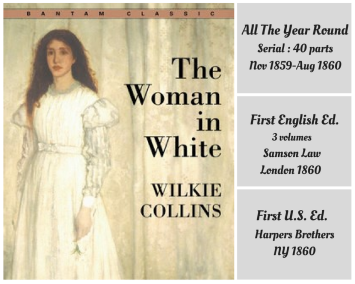 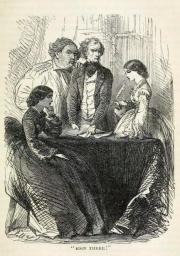 Sir Percival Glyde produced a parchment paper folded many times over lengthwise and placed it on the table. Unfolding only the last fold, he dipped a pen in ink and handed it to his wife. “Sign your name there,” he said, pointing to the place…
“What is it I am to sign?” she asked quietly.
“I have no time to explain… Besides, you wouldn’t understand.
“I ought surely to know what I am signing…”
“Nonsense. What have women to do with business? I am your husband and NOT obligated [to explain].

As a major fan of historical fiction, I decided to reach back in history and read a book actually written in the past; not a book reconstructed from research. Some time ago I was introduced to Wilkie Collins’ popular 1860 work, The Woman in White, and is it has been languishing on my to-be-read shelf. This week, I dusted it off and read it (while listening to the audio version, I might add. Really enjoyed the novel read in British accent.)

The Woman in White appeared first as a serial in forty parts in Charles Dickens’ newspaper, All The Year Round, in 1859-1860; a publication for the masses not just the elite. As the story originally was printed in those forty parts, it was necessary to create a crisis with enough suspense and tension to keep the masses anticipating the next part of the story. Woman in White, when published in book form in both the UK and US in 1860, locks all the forty segment endings into one work, appliqueing the increasing intrigue layer upon layer to the drama already established. It has never been out of print. Woman in White has been adapted for film and TV including a new 2018 BBC series.

After finishing the book, I believe that it could be been edited to reduce redundancy but overall worthy of its continued popularity. I did my best to summarize the plot below; it is an intricate story that doesn’t lend itself to summary very well. If you decide at this point in my lengthy review to move on, let me say – just read the book. Many women’s issues in 1859 are just as screwed up today.

My husband upon reading my review replied, “Good God. You actually read this book?” Don’t be turned off. Give it a chance.

Women’s Rights in 1850s Victorian England were very restrictive. Marriage essentially transferred all control from a woman’s father to her husband. Under the law, the husband controlled all property, earnings and economic decisions. Additionally, women themselves became the property of their husbands with no recourse if assaulted or mentally abused. It wasn’t a shock to readers in 1859 that Sir Percival needs Laura’s money and has every right to it.

The Woman in White was the key book in establishing what became known as ‘sensation fiction’: breathless and deviously plotted novels that [features] virtuous women menaced by dastardly cads, and the thirst for gruesome and spectacular crimes…  British Library, Author Roger Luckhurst

BLACKWATER PARK
Home to the dastardly and cunning Sir Percival Glyde, Baronet, the man betrothed to gentle and naive Laura Fairlie.
Other residents include the humorless and obedient Countess Fosco (and Laura’s aunt) and her morbidly obese Italian husband, Count Fosco; a man with a conniving nature masked behind a bombastic and charming personality.

WOMAN IN WHITE
Anne Catherick, a mentally challenged is a victim of forced incarceration in a private metal asylum by her mother, Jane Catherick, and their overlord, Sir Percival Glyde. Her escape and discovery by Walter Hartright reveals her to be a doppleganger for Laura Fairlie. The search for the missing Anne Catherick is a pivotal plot thread.

Themes and Plot
Woman in White is the complicated story of Sir Percival Glyde and his conspiracy to settle his deep financial debts by marriage to the wealthy young Laura Fairlie; a marriage betrothal established between Sir Percival and Laura’s father before his death.

Shortly before her marriage, arrangements were to provide drawing lessons for Laura Fairlie. A young handsome London art master, Walter Hartright was contracted. During Hartright’s journey to Limmeridge House he stumbles upon an agitated and unchaperoned young lady, dressed all in white, seeking directions. Arriving at Limmeridge house he learns the woman in white is known to the household as Anne Catherick, the mentally challenged daughter of a former nurse to Laura’s now dead mother. Upon meeting, Laura, Hartright, notes to himself, that Anne Katherick is her doppelganger.

As expected, romance blooms between the art student and the art master. Laura’s older half-sister, Marian Halcomb, aware that Laura has no recourse but to marry Sir Percival, does her best to break up this budding romance by secretly arranging employment for Walter out of the country.

With Hartright out of the picture, the marriage takes place, and Laura becomes Lady Glyde. The newlyweds take up residence at Sir Percival’s estate, the dark and gloomy, Blackwater Park. At Laura’s insistence and to her invalid uncle and guardian, Franklin Farlie’s relief, Marian Halcomb moves into Blackwater Park as well. Lady Glyde is surprised to find her subdued and subservient aunt, Countess Fosco, and her flamboyant Italian husband, Count Fosco, friends of Sir Percival, also living at Blackwater Park.

In his own home, Sir Percival’s true nature reverts to his dastardly conniving self, a personality change anticipated by the girls. Laura had received a mysterious letter just before the wedding warning her that Sir Percival has a deep and dangerous secret that he would kill to protect. In time, it is discovered that the mystery author is the missing Anne Catherick.

Moving rapidly ahead with his plan, Sir Percival orders Laura to his library to sign a legal document. He has cleverly disguised the contents transferring all Laura’s inheritance to him. Laura, in a moment of obstinacy, refuses to sign it until she is told what the document contains. Sir Percival, in the presence of witnesses, informs her that as her husband he doesn’t have to tell her anything.

Percival, furious at his wife’s continuing refusal to sign over her inheritance and terrified of his debt holders ability to destroy his life, turns to his cunning friend, Count Fosco, to work toward an unsavory solution.

The plot thickens. Marian Halcomb’s constant influence over Laura becomes a thorn in the men’s side and Laura, cowed by circumstance, is reduced to a simpering shell.  The hunt is on for Anne Catherick by everyone; the ladies, to learn Sir Percival’s secret, and the men to keep Anne from sharing Percival’s dark secret.

As Percival begins to disintegrate, Count Fosco steps up his role in locating Anne Catherick  by tracking Anne and Marian’s every move. He is convinced she will find Laura and tell her the truth about Percival. When his theory proves true, Anne is discovered talking to Laura, he too, notes that Anne Catherick is Lady Laura’s doppelganger and there is a change in plans!

About this time, Walter Hartright reenters the picture having returned from his overseas assignment. Upon learning about Laura’s cruel marriage, steps up to protect Marian and Laura.

Count and Countess Fosco execute their cruel grand scheme by telling Laura she would be joining her sister, Marian, at Count Fosco’s home in London. Instead, Laura is drugged and taken to the mental asylum dressed as Anne Catherick. Meanwhile, Marian is still at Blackwater Park recovering from typhus; hidden in a secluded part of the estate.

A sickly Anne Catherick is taken to London dressed as Lady Glyde. A forgery passes along the inheritance to Percival but things begin to disintegrate when Anne suddenly dies. She is buried as Lady Laura Glyde back in Laura’s childhood home of Limmeridge House.

Marian, recovered, goes to the mental asylum to ask Anne what she knew about Laura’s death and is startled to recognize a drugged Laura. Marian is thwarted at every turn to restore Laura back to life but eventually is successful.

Meanwhile, Sir Percival, now in command of the inheritance, has bigger problems when proof of his dark secret is discovered by Walter Hartright. Percival rages throughout the countryside trying to destroy evidence; in the end he is struck down by karma.

Count Fosco, buoyed by successfully completing his mission to help Percival, sails off to ports unknown, where he too is struck down by unforeseen justice.

And as you expect, Walter, Laura and Marian live happily ever.