GIVER OF STARS: a novel

Alice asked Margery, “If you’ve never been further than. . . Lewisburg. . . how is it you know so much about animals in Africa?” Margery yanks her mule to a halt. “Are you seriously asking me that question? ” The answer of course is because of books. Books that brought stories of Africa to Appalachia. . .

In the midst of the Great Depression, Eastern Kentucky was among those states most severely economically impacted. Thirty percent of the state was illiterate. Roosevelt’s New Deal initiative, The Pack Horse Library project, implemented by the Works Progress Administration in 1934 brought hope of a better future through literacy. The project provided jobs to local pack horse riders, mostly women, with a salary of  $28 a month ($495 in today’s dollars).  The project ended in 1943 with the ramp up to World War II and the elimination of the WPA projects.

The Pack Horse program was not immediately accepted by the mountain folks. Literacy threatened the status quo.  “Families should be reading the Bible. Nothing else.”  “We are struggling to control what influences are coming in and out of our own homes.”

Jojo Moyes, known for her numerous heartwarming romance novels, several made into movies (Me Before You) has written her first historical fiction featuring the Pack Horse Library project. Fans of her romance fiction will not be disappointed.

GIVER OF STARS, set in eastern Kentucky during the Great Depression, features a coterie of fictional pack horse librarians – Margery O’Hare, the daughter of a cruel and deceitful bootlegger heads the group. A woman comfortable in her own skin, outspoken and independent; preferring life alone in the wilds of the mountains. A woman stained by her family legacy. Alice Van Cleve, the daughter of wealthy English parents, newly wed to Bennett Van Cleve, the  son of a cruel American coal mine baron; her new life filled with coal dust and pack horses not racing thoroughbreds and Mint Juleps. Izzy, the reclusive daughter of local parents; the victim of polio. Beth, the daughter of a local farmer, and Sophia, the African-American sister of a crippled miner and a trained librarian from Louisville.

The town residents and the folks up  and down the hollers and along the creek beds include a destitute and distrustful father struggling to raise his motherless daughters, a few pompous asses of the human kind, most notably, Alice’s father-in-law, and a miner with a heart of gold and a determination to marry the wild child, Margery.

The novel is packed tightly with a whole slew of themes that are examined closely and intimately at times; some painful, some joyous, most true-to-life and a couple dragged out too long. Overall an enjoyable read that brings the reader into the beauty of the mountains at a time when nature is threatened by mining and the isolated residents face a paradigm shift in long-held traditions, gender roles and racial discrimination.

Jojo Moyes and “Giver of Stars” and a second novel by Kim Michelle Richardson entitled “The Book Woman of Troublesome Creek” were published in 2019 within months of each other and have been the subject of some controversy. Some critics feel elements of “Giver of Stars” closely resemble those in “The Book Woman of Troublesome Creek”. Both novels cover the Pack Horse Librarian project. Be that as it may – both novels have been very popular and Richardson’s novel is on my TBR list.

THOSE PEOPLE : a novel 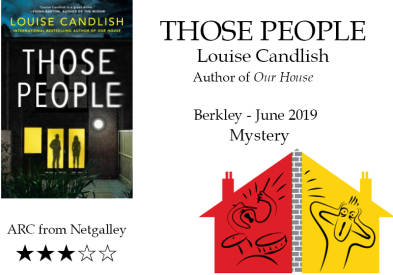 My relationship with him? Mutual hatred, I would say. I recognized his type straightaway. Doesn’t give a shit what anyone else thinks. Uncivilized, basically. – Ralph Morgan, 7 Lowland Way

Lowland Way is a lovely tree-lined residential street filled with old Victorian homes. This award-winning community is known for self-monitored harmony and peace; a place where children can safely play in the streets on every Sunday. This upper class oasis turns a blind eye to the economically depressed area on the other side of their manicured hedges; this “Stepford” community pats itself on the back with haughty self-importance and perfect neighborly respect for rules and regulations. There is suspense hovering over the neighborhood. Who will inherit the home of the recently deceased neighborhood matron who lived at 1 Lowland Way?

The opening chapter reveals that the new owner, Darren Booth, having moved in eight weeks earlier, was not fondly received and that something tragic has happened at that address. The British Metropolitan Police are interviewing one of the residents, Frank Morgan from 7 Lowland Way.

Yes, we’re aware that someone’s been killed; of course we are. What a terrible way to die, absolutely horrific. . . Yeah, it all looked normal on the corner when I left. The usual scrap heap. Piles of rubble everywhere. . . A total disaster zone. . .

The neighborhood’s hopes that the heir to Jean’s home would be a respectable up-and-comer were dashed when Darren blew into town with massive sound system, fleet of rusting used cars, and a tool box filled with ear-splitting devices. This misplaced commoner began a 24-hour renovation of the house and staged a used-car business parking his broken down vehicles in the limited parking available on the street.

1 Lowland Way is a duplex; one of the only semidetached homes on the street. The residents of the other half of the house are introduced to Darren Booth in the dead of night when the adjoining wall in their baby’s bedroom came under assault from a power tool. The jack-hammering noise was overlaid with an accompanying dose of heavy metal music.

An elderly resident across the street from 1 Lowland Way suffers financial ruin as her B&B loses it’s ranking due to the situation at the Booth house. Guests were turned off by the noise, the rusty cars, and the haphazard scaffolding.

Day after day the noisy intrusion continues with no relief to be found. “Friendly and unfriendly” visits to the new home owner have been worthless.  The police and the community council feel they have no reason to step into the fray.

As the police investigate, what at first appears to be a tragic accident, the placid nature of the neighborhood begins to slowly disintegrate. Tempers rise and suppressed feelings surface that break apart friendships. A seismic shift begins in their group dynamics; everyone within range of 1 Lowland Way exposes their dark side.

When the repeated police interviews begin to reveal that a murder has been committed, everyone begins to take sides. Cue the finger-pointing and accusations.

The story unfolds slowly; excruciatingly slow, flipping from present day to events leading up to the tragedy. Although the story hones in on the lives of Darren Booth’s neighbors, we never get inside the heads of Darren or his girl friend, Jody. We are given just enough information to deduce that neither side of the neighborhood conflict is without fault. It is an interesting study of human behavior when individuals are put under uncontrollable pressure. Those People creates a scenario where both sides of the social strata make no attempt to find an amenable compromise. The ending, predictable, has a few surprises but overall leaves the reader feeling underwhelmed.

The book was an easy read but fails to match the success of the author’s first book, Our House.  Let’s hope the author steps up to the plate with her third book.