COLOR of LIGHTNING: a novel

North Texas was a good place to be a black man; slave or free, they were all expected to carry arms… a person could pretty well do what he liked and he could be whatever he took a mind to as long as he had a strong back and a good aim. 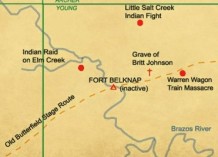 Color of Lightning, published seven years before the bestseller, News of the World,  illuminates the untamed frontier with its Indian raids, legions of wagon trains determined to settle the land, and the heavy presence of military forts to enforce taibo or “white man’s” laws on the indigenous peoples.

This is not a made-for-TV setting with the good guys in white hats and the bad guys in face-paint and feathers. It is a graphically violent story of two cultures; one struggling to maintain centuries old traditions and the other determined to expand and subjugate the earth and native populations. The book is heavy with emotion and should be read with an eye to each side’s perspective.

In the real-world of 1860’s west Texas lived a newly freed slave, Britton “Britt” Johnson and his wife, Mary. The Johnsons built a home in a settlement along Elm Creek, not far from the Brazos River, and about 10 miles from Fort Belknap. It was a peaceful place with nice neighbors and a promise of new life. The smart and enterprising, Britt, soon established a successful freight wagon business serving the civilian and military communities.

October 13, 1864, Britt Johnson was away buying supplies when over six-hundred Kiowa and Comanche Indians made a murderous raid along Elm Creek. Britt’s wife, Mary and two of their children, Rube and Cherry were among those captured. Britt’s oldest son, Jim, was murdered. The specific details of Mary, Rube and Cherry’s rescue by Britt do vary but his valiant efforts and success are without question.

Through the author’s imagination, Britt is brought to life; a man’s man- proud, brave, courageous, fearless- strong in will, dangerous to his enemies and tender in heart to those in need of compassion and understanding- and capable of mistakes.

We ride alongside Britt as he sets out to rescue his family, making an unlikely friend along the way with a temporary outcast Comanche named Tissoyo. We feel the freedom of riding alone in the unfettered  land and smell the danger that lies in every shadow and thicket.

Our hearts break as we follow behind Mary Johnson and Elizabeth Fitzgerald as they are force marched to faraway Indian villages, suffering unprovoked violence, starvation, and inhumane living conditions. We yearn to offer support as they fight to survive; working long painful hours in the daily rigors of subsistence life with rudimentary tools and ingenuity. We feel each mother’s pain as their children are adopted by tribal families; enchanted by the simple lifestyle, the loving attention and for Britt’s son, Jube, the sense of belonging and power as a warrior.

Meanwhile, Samuel Hammond, the newly appointed Indian agent, arrives in Texas, armed with good intentions and deep spiritual convictions. The newly redesigned Indian Bureau has turned over management of the frontier to various religious denominations. The Quakers have been given control of  Comanche and Kiowa-Apache territory. Sure of his God and sure of his mission, Samuel forbids armed guards to be present when distributing monthly rations of food and supplies fulfilling the agreement of a recent peace treaty. The efforts to force the tribes into submission with garden tools, calico and Bibles fail; the natives determined to maintain their territory, independence, and freedoms to their last breath. Samuel becomes entangled in the orders from his religious leaders to avoid violence and the reality that religious conversion will not happen, that war is inevitable, and that force is the only way to destroy the will of the tribes.

Samuel looked all about himself on the bare plains and thought what a miracle of endurance it was to live like this solely on God’s bounty, on whatever came to hand, in this sere country… People of great courage and fortitude, born with an unsatisfied wanderlust… And he must bring this to an end. That was his job. That was why he was here.

The Comanche and Kiowa leaders and warriors -unduly cruel, seemingly heartless, devoid of civilized morality, and terrifying to behold – are justifiably distrustful of the “Americans” and their threadbare peace treaties and broken promises.The tribes are caught between worlds; one world, that of the past, with no borders or boundaries, free to follow the seasons and the new world with its imaginary borders, fenced in properties, and self-centered landholders. The new people have brought deadly illnesses like smallpox that have decimated their ranks. The majestic buffalo, a vital resource, are being hunted to near extinction. What choice do they have but to rail against an enemy intruder?

Tissoyo said they were near the estado of Colorado… What is an estado?
The name of a place.
There is supposed to be a line nobody can see.
That’s right.
How do you make a line if it can’t be seen?
It’s only on paper.
You never know what the taibo will think of.

The book struggles a bit in the beginning but once the characters reach the panorama of Texas it takes off.

Samuel’s story is the weakest link. His character is naive and it is no surprise the tribes have no respect for him.

The unvarnished descriptions of the gang rapes, unwarranted brutality, and dehumanizing murders, necessary to authenticity, led me to the Rolaids bottle more than once.

I was most affected by the inability of some captives to return to their old life, forced by circumstance to be forever stuck between worlds.

And ending on the beauty of the author’s writing and the peace that solitude on the plains can bring, I leave you with an early morning view from horseback.

There are no mornings anywhere like mornings in Texas, before the heat of the day, the world suspended as if it were early morning in paradise and fading stars like night watchman walking the periphery of darkness and call out that all is well.