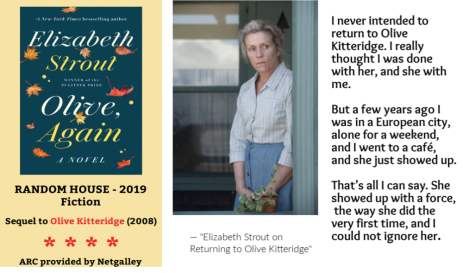 An old Mainer friend once told me that Moxie was the greatest beverage in the world (and actually gave me a bottle to try.) I rank it right up there with cough syrup and kerosene. “Acquired taste,” he said. But I digress.

If you know anyone from Maine, you probably noticed that they don’t suffer fools gladly, don’t waste time with long drawn out dialogue, are fiercely independent, have an innate kindness, generous spirit, and are best known to be smiling with a puckered-up lip arrogant expression.

So, don’t judge Olive too harshly. She comes by it naturally. Ayuh (yup anywhere outside Maine). It’s just that she is a bit overboard with her honesty and “just tell us what you really think” personality. You don’t have to read Olive Kitteridge  first, but I recommend it.

Olive, Again picks up a month after Oliver Kitteridge left off. Henry Kitteridge has been dead two years and her son, Christopher, lives in New York City with a new wife and a houseful of children. Olive, now in her 70’s, still lives in Crosby, Maine. If we were to ask her why, she would probably utter her exasperated trademark phrase, “Phooey!” Walking away, she would flip her hand over her head in dismissal.

The point of the new novel; Olive, the unfiltered, presumptuous, and dismissive busybody of Crosby  has bumped up against a much stronger opponent – old age. She’s beginning to realize that she has been a smart-ass all her life and it is just possible she doesn’t have the answer to everything after all. Stress the word – beginning to realize. She’s facing unwanted and uncontrollable changes in her life. One thing she never loses is her “Olive-ness”.

The novel is comprised of 13 interconnected stories of drama and emotion that transpire over the next ten years; some featuring Olive and some she slips through tangentially. Each vignette dives deeply into the troubled behind the scenes lives of everyday people. People that Olive has crossed paths with in her teaching career or lived among for years.

Don’t be turned off by the threat of a gloomy book. It is a book full of acceptance, compassion, and resilience. A struggle to accept aloneness as opposed to loneliness. A struggle to find answers to the meaning of one’s life and the answers to why bad things happen and how we come to accept ourselves.

My favorite chapter, The Poet. Olive is now 82 and walking with a cane.  She is having a lonely breakfast at a local diner. She sits and stares out at the water and admiring the beauty of the land. The waitress oblivious to her presence after taking her order. A young woman enters the diner and sits staring out the window with a deep concentration etched on her face. Olive recognizes her as a former student who has returned to Cosby; a woman, now, who has become a world  famous poet.

Excerpt from The Poet

Olive placed her fork on her plate…and walked to Andrea’s booth. “Hello Andrea, I know who you are.”…There was a long moment of silence – before Olive said, “So. You’re famous now.”

[They chat for a while with Olive asking Andrea questions but interrupting her with answers to the questions from Olive’s own life. Olive tells Andrea that she reads about her life on Facebook and Andrea is surprised she would be interested. Olive asks if Andrea enjoyed a recent business trip to Oslo. Andrea replied she gets lonely on those trips with little time to sight-see.]

Olive wasn’t sure she’d heard her right… “Well, you were probably always lonely.” [Olive stares at Andrea and remembers the young girl from a poor Catholic family, one of eight children, who always looked so sad and preferred her own company.]

Andrea looked at her then, gave her a long look that confused [Olive] somewhat; the girl’s eyes… seemed to break into a tenderness around their corners as she looked at Olive. The girl said nothing.

[Andrea attentively listens to Olive talk about her life, the ravages and indignities of old age, the recent death of her second husband and the distant relationship between Olive and her son, Christopher. Andrea politely asks why Olive thought children were needles to the heart. When Olive has run out of steam, she rises from Andrea’s table to leave.] Olive wiped her fingers on a napkin, “You can put that in a poem. All yours.” [And she did. A mysterious person slipped a copy of the poetry journal with a post-it flagging the new poem to Olive’s attention under her door.]

… Who taught me math thirty-four years ago / terrified me and is now terrified herself / sat before me at the breakfast counter / all white whiskered / told me I had always been lonely / had no idea she was speaking of herself . . .

It was all there. . . the poem’s theme, pounded home again and again, was that she – Olive – was the lonely, terrified one. It finished, Use it for a poem, she said / All yours.

[Olive tossed the magazine in the trash.] “Andrea, this poem stinks.” [But Olive knew better. It was true.]

I thought Olive, Again was the better of the two books and I loved them both. Not a bad read for any person facing the indignity of sagging skin, faulty “towers”, leaking pipes, and the sense that you don’t matter anymore. Loved it. Restored my sense of humor and purpose in old age; do the best you can do with what you got. Highly recommend for book club discussion.