THE ONLY WOMAN IN THE ROOM

If Hedy [Lamarr]’s society had viewed her not simply as a blindingly beautiful creature, but as a human being with a sharp mind capable of significant contributions, they might have learned that her interior life was more interesting and fruitful than her exterior. – Author, Marie Benedict

Hedwig Eva Maria Kiesler  was born on November 9, 1914, into an upper-crust Jewish family in Vienna, Austria. Her father, Emil, a successful banker, was frequently absent on business none-the-less he spoiled Hedy when he was home. He encouraged her education and her love of the arts. Her mother was caustic and critical of her father’s attentions and left Hedy to the care of tutors and nannies.

Hedwig was a very smart and lonely child. She found a way to mask her loneliness by creating alternate worlds expressed in little plays where she entertained her dolls. A childish habit that eventually lead to her internationally renowned acting career.

Europe,1933.
While a malevolence festered in Germany, on the stage in Vienna, Austria, Hedy, now a 19-year-old stunning beauty, had moved from dolls to become a well-known stage actress. In the audience at one of her performances was Friedrich (Fritz) Mandl, a shady Austrian arms dealer, known as the “Merchant of Death.”

Mandl decided a stunning young wife accompanying him to lavish political dinners would be an advantage.  He possessively pursued her. Her parents, sensing the danger of displeasing this distasteful older suitor, advised her to marry him – ending her career as an actress. If rumors were true about the dangers for Jews in Europe, he might prove her family’s savior. Or so they thought.

Her marriage with Fritz began as a fairy tale but swiftly transitioned into a nightmare as her husband became obsessive, abusive, and controlling. Trapped into this bed of isolation and cruelty as her nation struggled to survive annexation by the Nazis, Hedy found she could use her beauty as a mask.

Behind the quiet bejeweled exterior, an active mind was engaged in learning secrets of the coming Anschluss and the annexation of Austria. It never occurred to her husband’s loyal servants or the powerful political figures, that this gorgeous woman sitting like a potted plant by her husband’s side, actually understood everything they discussed openly in front of her. Smiling demurely, wearing her mask of vapid airhead, she learned of weaknesses in the weapons of war sold by her husband and the plans for removing the Jews from society.

As Nazi troops gathered on Austria’s border, Hedy knew it was time to play her greatest performance. Using her contacts in the entertainment industry, she disguised herself and escaped her husband and the Nazis by emigrating to the United States – taking with her Nazi secrets. Unsure what to do with this knowledge.

In October, 1937, Hedy Kiesler Mandl stepped off a train in Hollywood as Hedy Lamarr. Once more, relying on her well-honed skills as an actress, she enchants Louis B. Mayer from MGM Studios. She quickly becomes an internationally loved movie star. And once again, she finds herself controlled by men.

A chance meeting with the  avant-garde composer and pianist, George Antheil, led to Hedy making a friend who could look beyond the pretty face. Hedy, having spent hours in her husband’s personal library had amassed specific knowledge of torpedoes technology. Still struggling with what to do with her knowledge of the weaknesses in Nazi weaponry, she enlists Antheil’s help in creating technology that would improve the American Navy’s accuracy in torpedo accuracy.

They are successful. The patent office approves her invention and forwards the information to the Navy – who promptly refuses to take seriously anything invented by a woman. Yet, she had the last laugh. You can thank, Hedy Lamarr, for your cell phone. Her invention was instrumental in its development.

I am glad I read the book. It wasn’t a perfectly crafted book. The character development was weak. Some instances were covered poorly; while in America Hedy was approached to help orphaned European children by adopting. We see her reach for an application but we don’t learn until later that she did adopt a child.

Personally, I feel that the book would have been better if it was less a recitation and more invested in Hedy herself. Sadly, it came across to me as though we never really got behind Hedy’s mask. Perhaps that was intentional? It’s a good book. Just not great.

The Book of Harlan

The Book of Harlan

Harlan Elliott arrived on Christmas Eve, right there on the parlor floor between the piano and the Christmas tree [1917]…
[He] kept his eyes closed for two whole months…Considering how his life would turn out, perhaps Harlan knew, even in infancy, just what the universe had in store for him.

I have struggled for days over this review.  Not that I didn’t like the book or had any trouble finishing it; the pages seem to turn themselves. I loved it. The chapters were short (and presented in the third person).  The difficulty arises because there is so much to discuss! The book’s timeline spans everything from the end of slavery to the moon landing. There were so many themes! Blues/Jazz, Racial discrimination, Abandonment, Drugs, Cultural Identity, War/Holocaust et al. 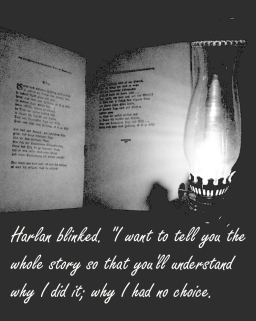 Harlan’s life is sprinkled through world events like one of those children’s popup books. Each time he pops up, it’s been years since we last heard about him. Harlan repeatedly faces life altering challenges, mostly brought on by himself and a few hoisted on him by society. As he plows through other people’s lives in his devil-may-care attitude, he leaves heartbreak and sorrow in his wake. There were times I would like to have reached through the page and played wack-a-mole to get him to grow up.

A number of interesting characters intersect Harlan’s path. Gwen, a naive girl, misunderstanding that sex is not love. Lizard, lost in his cultural identity but tied to Harlan through their mutual love of music. Lucille, his mother’s best friend whose living large life plays an important role in so many ways. His “Banty rooster” mother, Emma and his hardworking father, Sam, desperate to help Harlan overcome his demons. John Smith, a childhood friend, who Harlan loves like a brother from another mother. And my favorite, Louis Armstrong, whose heart and soul makes everyone’s day beautiful.

[The Harlam band bus arrived in Augusta, Georgia and discovered all the colored-only hotels full. As the band prepared to settle in their bus seats for the night, Harlan sleepily says…]

“We passed a hotel not a mile down the road with a vacancy sign!  Boy, this ain’t Harlem…This here is Jim Crow territory…That sign is for white-folks only.”

Storyline
Harlan’s grandfather, The Reverend T.M. Robinson of the Cotton Way Baptist Church in Macon, GA had come a long way from his slavery days in Charleston.  The Reverend had hitched his star to Jesus and in no time his successful ministry provided a high quality life for his wife and children in the “highfalutin” colored section of town.

The Robinson’s youngest child, Emma, a gifted pianist, enjoyed the niceties provided by her father’s success but somewhere in the mystery of conception had picked up some stray gene that drove her to sample the seamier side of life.  When her biological timer went off in her teen years, she began a secret relationship with Sam Elliott, a local carpenter. The lovebirds kept their tryst going right up until she blew her father’s mind with the news she would need a shotgun wedding.

The teenage newlyweds weren’t ready for adulthood let alone parenting. Emma’s itch to leave Macon was stronger than her need to care for her new child. They had no clue where they were headed but it had to be out of Georgia and that meant leaving little Harlan to be raised in the same environment she was escaping.

Harlan, much like his mother, enjoyed a carefree life in the Robinson home. He learned early on that he liked getting his own way and to hell with everyone else’s feelings. His grandparent’s failure to hold him accountable for his behavior or to develop empathy and compassion would haunt all his future relationships. He achieved his happiness by modeling his grandfather’s self-important behavior. (This self-aggrandized manner would later drag friends into situations they would most likely never do otherwise.) When he was 11, his beloved grandfather died.  This death and the unexpected decision by his grieving grandmother to hand him over to his parents care marked the first of many times he would be forced to forge “a new life.”

Sam, Emma and Harlan moved to the epicenter for Negro jazz and blues music, Harlem. Emma had big dreams of emulating her best friend,  Lucille, a popular Negro recording singer, making her mark in the heady world of the Harlem Renaissance.

While living in Harlem, Harlan discovered his inherited music talent following in love with the guitar. When he dropped out of school at 16 to pursue a musical career, Lucille took him on band tours through the United States. With little supervision and poor adult role models, Harlan found drugs, alcohol and sex. These new vices drew him deeper and deeper in their grasp until he no longer was reliable to the band. You don’t bite the hand that feeds you; Lucille fired him.

While nursing a grudge, Harlan befriends another musician named Lizard and in time the two form the Harlem World Band.  In 1940, the band headlines at a cabaret in France. The group is shocked to see that Paris is colorblind with no whites-only barriers. But there is the unsettling concern among the French citizenry that the marauding Nazis might choose to invade France. Harlen sees the music still playing and the booze flowing and believes he will be long gone before trouble arrives.

When trouble arrives shockingly quick, the Nazi flag and soldiers fill the streets, Harlan refuses to take it seriously. He has a ticket booked on a steamer for New York in a couple of days. Harlan sweet talks his terrified friends into partying heartily right up until the time to leave. Heading back to the hotel after a crazy night of partying, a man steps from the shadows and asks for a light. The rest of the group recognizes the Nazi uniform and senses the danger but Harlan, as usual, has to pull the tiger’s tail. In the may-lei, the women race away but Harlan and Lizard are beaten and taken captive.

Harlan and Lizard are sent to Buchenwald Concentration Camp where they encounter the “Bitch of Buchenwald”, the wife of the Commandant. Ilse Koch loves to torture and she does it so well. This portion of the book is heavy and hard to read. Harlan survives five years of torture before the Allies rescue him.

The feisty Harlan has been replaced by a shell of man finding it safer to bury the horror. To talk about it would be reliving it. His parents and friends do what they can to try to reach him but he has retracted into a world none of them can comprehend.

The ending is bittersweet with a twist of revenge and shred of hope.