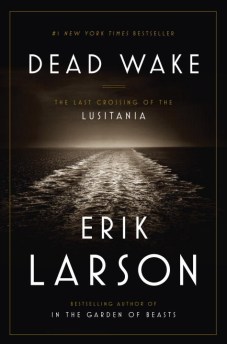 The Last Crossing of the Lusitania

“THE ADMIRALTY’S focus was elsewhere, on a different ship that it deemed far more valuable.”

Who wasn’t moved by Leonardo DiCaprio and Kate Winslet in the bow of the Titanic, arms spread, leaning into the wind? That heartbreaking love story of mismatched social class lovers and the tragic maritime disaster moved me to read a more serious work from that same time-period, Dead Wake: The Last Crossing of the Lusitania.

I thought I knew the basics about the sinking of the Lusitania. It was torpedoed by a German submarine, Americans traveling aboard the liner were killed, and angry America joined the war. Those facts are true but they are not as they seem.

Erik Larson writes in a Note to Readers in Dead Wake:

I first started reading about the Lusitania on a whim…What I learned both charmed and horrified me. I thought I knew everything there was to know about the incident, but, as so often happens when I do deep research on a subject, I quickly realized how wrong I was.

Sifting and digging through countless documents, records, pictures, letters, interviews and memoirs, Larson has brought this tragedy to life and in doing so has revealed how little we really knew of that fateful day. One historical event that has been reduced in time to a sentence or two in most history books, now comes alive (without embellishment) using only the facts and words of the people intrinsic to this event. The author says, I’ve really tried to strip my writing of as many adjectives and adverbs as I possibly can. Each new fact or story is presented like a detailed slideshow slipping around in time -before, during and after- the sinking. There were so many intricate details unearthed it was a difficult book to review!

Larson sets the stage by placing the Lusitania majestically docked bow-first at Cunard Steam Ship Company’s Pier 54,  in Manhattan with Captain William Thomas Turner proudly standing at attention on the bridge. While the ship loads pa

ssengers and supplies, Larson reveals the life of the Lusitania from inspiration to shipwreck.

The Cunard Steam Ship Company, based in Liverpool England, proudly promoted the gem of their fleet, the Lusitania, reputed by many to be “the epitome of all that man knows or has discovered or invented up to this moment of time.” Like the Titanic, three years earlier, was considered unsinkable. The Titanic disaster did highlight the need for additional lifeboats and safety gear and these and other modifications were made to the Lusitania allaying any fears the passengers had about a maritime incident.

Dead Wake steps back and forth in time bringing the reader up to speed on the political climate and causes of the First World War that began on July 28, 1914 when Austria declared war on Serbia. Other European nations, bound by treaties and alliances, lined up to form a divided Europe recognized as the Allied Forces (France, the United Kingdom and Russia) against the Central Powers (Germany and Austria-Hungary). Suspense was created as Larson describes the delicate timeline for the United States entry into the fray for the Allied Forces.

While the First World War is better known as a brutal killing land-war fought in the trenches, Germany’s development of submarine warfare threatened to destroy a key ally – Great Britain.  As an island nation Britain relied on seaborne commerce for everything and as the war pressed on into 1915, British military and civilians vessels were lost with increasing numbers. Winston Churchill, then the First Lord of the Admiralty, was determined to save Britain with the help of the United States by any means necessary and for as long as it would take to convince them of Britain’s need.  President Woodrow Wilson, knee-deep in grief and depression over the loss of his wife, and the American public were equally determined to keep the United States out of the war.

On February 4, 1915, Germany stepped up their maritime action by issuing a proclamation designating the waters around the British Isles an ‘area of war‘ in which all enemy ships would be subject to attack without warning. Thus far, passenger liners, had escaped unscathed.

On that beautiful morning of May 1, 1915, as the Lusitania was poised to leave Manhattan, the German Embassy in Washington ramped things up in the Atlantic by posting a notice on the shipping pages of the New York newspapers cautioning that vessels flying the flag of Great Britain, or any of her allies, are liable to destruction and travels sailing on such ships do so at their own risk.

Cunard responded to the warning by issuing the statement that the Lusitania was the safest boat on the sea…too fast for any submarine. No German war vessel can get her or near her.

As the Lusitania begins her fated crossing, we are given a slideshow tour of the ship itself from 1st Class cabins down to the boiler room. The slideshow takes us through the passenger list peering openly into the lives of famous passengers and the travel plans of the not-so famous. We learn why, in the heart of a vicious war, they felt the need to leave the safety of America. We watch laughing children play hop-scotch, observe a traveler’s gaze as the crew practices hoisting life-boats into position, smile as Dwight Harris fingers the engagement ring in his pocket he dreams of presenting to his beloved, sit in the bleak quarantined room with a worried mother concerned for her sick child, listen to mothers sharing stories about relatives and friends waiting for them to arrive…….

For the first time, we ride shot-gun with a U-Boat 20 Captain and his crew as he navigates around Britain to reach his place in infamy. We sit in the ultra-secret Room 40 where the British Admiralty use confiscated German code books to decipher submarine wireless transmissions and track them right up to the hull of the Lusitania. We question why they repeatedly fail to warn Captain Turner of the danger. We watch in horror as the the U-Boat 20 Captain disturbed by what he has done, turns his sub away from the Lusitania, unable to witness further, the catastrophe through his periscope.

We see Captain Turner miraculous tossed into the sea and returned to land to face a grueling trial. Those trial proceedings will make you grit your teeth.

One of my little pet peeves? I didn’t need to know quite so much about President Wilson’s grief and the burgeoning love life he discovered on the other side.

In the end, the reader will be left with a shocked sense of what really happened. My opinion of some players changed radically; some for the good and others disgustingly. I will admit I shed a few tears for the families and friends trying to locate their missing loved ones; and in that search, Larson gives us some good news as well. I guarantee at least one story will make you chuckle.

The people we meet have now achieved immortality, lifted from the pages of history as more than a footnote. Highly recommended for history buffs and readers interested in life in the 1900s. The descriptions of the period costumes and opulence of the Lusitania alone make this a worthy read.

Thanks to Edelweiss and Crown Publishing for the Advance E-reader copy of this book in exchange for my honest opinion and review.